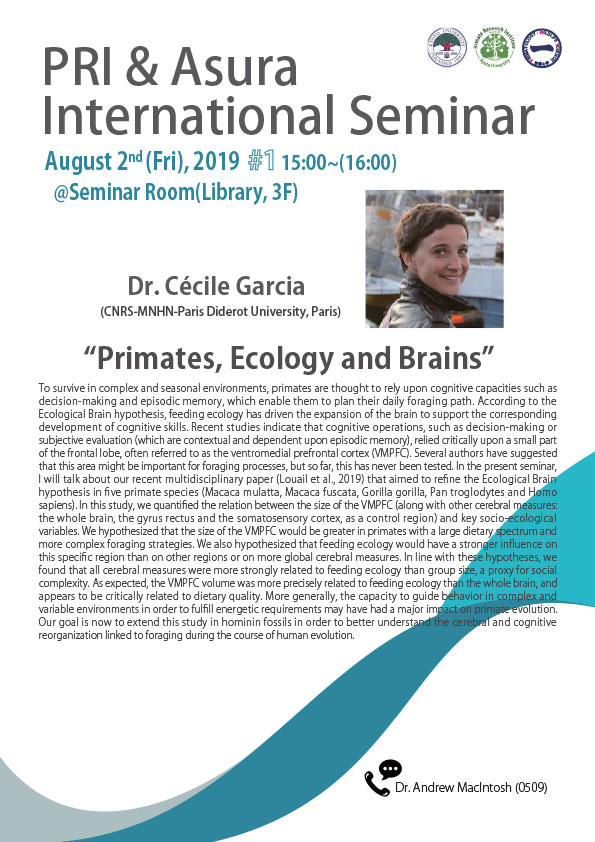 CNRS-MNHN-Paris Diderot University, Paris
Title
Primates, Ecology and Brains
Abstract
To survive in complex and seasonal environments, primates are thought to rely upon cognitive capacities such as decision-making and episodic memory, which enable them to plan their daily foraging path. According to the Ecological Brain hypothesis, feeding ecology has driven the expansion of the brain to support the corresponding development of cognitive skills. Recent studies indicate that cognitive operations, such as decision-making or subjective evaluation (which are contextual and dependent upon episodic memory), relied critically upon a small part of the frontal lobe, often referred to as the ventromedial prefrontal cortex (VMPFC). Several authors have suggested that this area might be important for foraging processes, but so far, this has never been tested. In the present seminar, I will talk about our recent multidisciplinary paper (Louail et al., 2019) that aimed to refine the Ecological Brain hypothesis in five primate species (Macaca mulatta, Macaca fuscata, Gorilla gorilla, Pan troglodytes and Homo sapiens). In this study, we quantified the relation between the size of the VMPFC (along with other cerebral measures: the whole brain, the gyrus rectus and the somatosensory cortex, as a control region) and key socio-ecological variables. We hypothesized that the size of the VMPFC would be greater in primates with a large dietary spectrum and more complex foraging strategies. We also hypothesized that feeding ecology would have a stronger influence on this specific region than on other regions or on more global cerebral measures. In line with these hypotheses, we found that all cerebral measures were more strongly related to feeding ecology than group size, a proxy for social complexity. As expected, the VMPFC volume was more precisely related to feeding ecology than the whole brain, and appears to be critically related to dietary quality. More generally, the capacity to guide behavior in complex and variable environments in order to fulfill energetic requirements may have had a major impact on primate evolution. Our goal is now to extend this study in hominin fossils in order to better understand the cerebral and cognitive reorganization linked to foraging during the course of human evolution.
# 2 (16:00-) 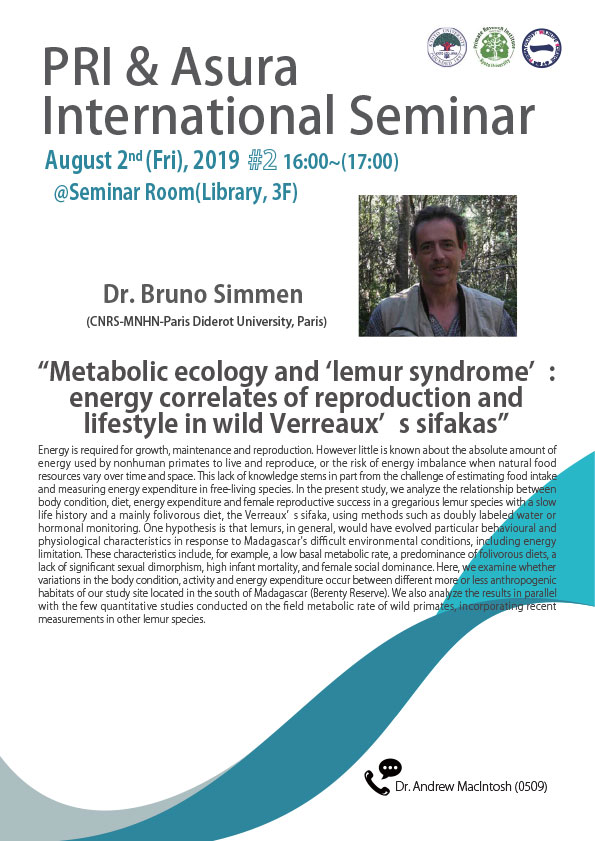 CNRS-MNHN-Paris Diderot University, Paris
Title
Metabolic ecology and ‘lemur syndrome’ : energy correlates of reproduction and lifestyle in wild Verreaux's sifakas
Abstract
Energy is required for growth, maintenance and reproduction. However little is known about the absolute amount of energy used by nonhuman primates to live and reproduce, or the risk of energy imbalance when natural food resources vary over time and space. This lack of knowledge stems in part from the challenge of estimating food intake and measuring energy expenditure in free-living species. In the present study, we analyze the relationship between body condition, diet, energy expenditure and female reproductive success in a gregarious lemur species with a slow life history and a mainly folivorous diet, the Verreaux’ s sifaka, using methods such as doubly labeled water or hormonal monitoring. One hypothesis is that lemurs, in general, would have evolved particular behavioural and physiological characteristics in response to Madagascar's difficult environmental conditions, including energy limitation. These characteristics include, for example, a low basal metabolic rate, a predominance of folivorous diets, a lack of significant sexual dimorphism, high infant mortality, and female social dominance. Here, we examine whether variations in the body condition, activity and energy expenditure occur between different more or less anthropogenic habitats of our study site located in the south of Madagascar (Berenty Reserve). We also analyze the results in parallel with the few quantitative studies conducted on the field metabolic rate of wild primates, incorporating recent measurements in other lemur species.