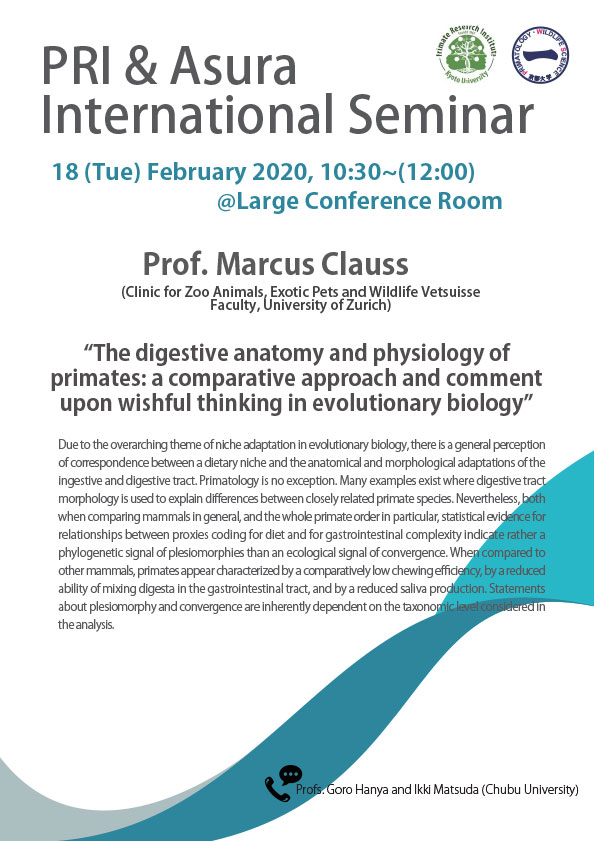 Clinic for Zoo Animals, Exotic Pets and Wildlife Vetsuisse Faculty, University of Zurich
Title
The digestive anatomy and physiology of primates: a comparative approach and comment upon wishful thinking in evolutionary biology
Abstract

Due to the overarching theme of niche adaptation in evolutionary biology, there is a general perception of correspondence between a dietary niche and the anatomical and morphological adaptations of the ingestive and digestive tract. Primatology is no exception. Many examples exist where digestive tract morphology is used to explain differences between closely related primate species. Nevertheless, both when comparing mammals in general, and the whole primate order in particular, statistical evidence for relationships between proxies coding for diet and for gastrointestinal complexity indicate rather a phylogenetic signal of plesiomorphies than an ecological signal of convergence. When compared to other mammals, primates appear characterized by a comparatively low chewing efficiency, by a reduced ability of mixing digesta in the gastrointestinal tract, and by a reduced saliva production. Statements about plesiomorphy and convergence are inherently dependent on the taxonomic level considered in the analysis.