Asura International Seminar is free of charge. Registration is not required.

We welcome anyone who wants to join the seminar. Please join us! 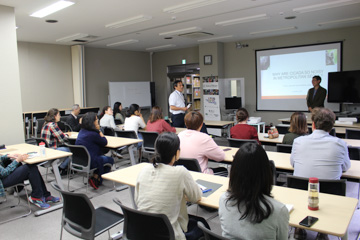 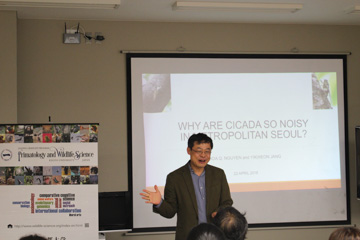 Why are cicadas noisy in Metropolitan Seoul? 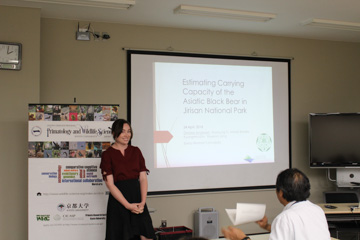 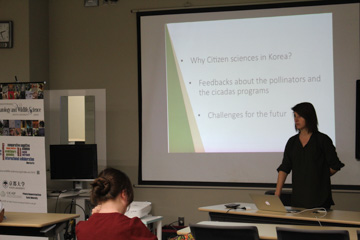 Why are cicadas noisy in Metropolitan Seoul?

Abstract
Urban environment has been considered to be detrimental to species composition and richness, leading to a decline in population abundance or even local extinction. However, populations of two cicadas Cryptotympana atrata and Hyalessa fuscata (Hemiptera: Cicadoidea) flourish in Metropolitan Seoul. These annual species usually emerge in summer and their noisy calling songs are nuisance to city dwellers. Enumeration survey of cicada exuviae depicts more prevailing population densities in urban and suburban habitats than in countryside one. The increased number of cicadas in urban areas compared with countryside counterparts has been attributed to several reasons, such as the availability of host plant species, the difference in predator avoidance strategies and habitat fragmentation, or the elevation in soil hardness along an urban-rural gradient and difference in soil burrowing capacity. As temperature is one of the most influential environmental variables on insects, here we examine the response of cicadas to temperature in the context of an urban heat island (UHI) effect, which is the phenomenon occurs when temperatures of urban cores become hotter than the surrounding areas. We hypothesize that UHI is responsible for the population prevalence of C. atrata and H. fuscata in Metropolitan Seoul. First, we examined the potential association between UHI intensity and cicada population densities by testing the critical environmental factors to the prevalence of cicada species in urban habitat. Among factors related to urbanization, only temperature was significantly positively correlated to resource-weighted densities of both species. Second, as thermal responses are frequently employed as a measure of thermal adaptation of cicadas to habitat conditions, we investigated the dependence of thermal responses of C. atrata and H. fuscata on thermal regimes of their habitats. Again, individuals inhabiting warmer urban areas exhibited significantly higher heat tolerance than those in cooler areas. Besides, 1 oC increase in ambient temperature incurred more profound magnitude of changes in heat torpor temperature in H. fuscata compared to C. atrata. Third, whole genome de novo transcriptome analysis was conducted to explore the role of gene expression underlying thermal adaptation of H. fuscata to the elevation of UHI intensity. Under exposure to heat stress, individuals occupying high UHI area expressed more significantly up- and down-regulated genes than those in low UHI or surrounding areas. Heat shock proteins, antioxidants and genes related to energy metabolisms are more up-regulated in high UHI occupants compared to low UHI or surrounding counterparts, which facilitates urban-adapted H. fuscata to deal with potential heat stress in their habitat. In non-stressful conditions, gene expression profiles were analogous across cicada populations. Overall, these results indicate that UHI phenomenon has promoted the abundance of two cicada species by enhancing cicada thermal tolerance and aiding in upregulation of genes in response to heat stress.

Abstract
The Asiatic Black Bear, Ursus thibetanus, which is classified by the IUCN as vulnerable to critically endangered across its range, was functionally extirpated from South Korea in the 1990s. However, the South Korean government began to reintroduce individuals into Jiri Mountain National Park, Republic of Korea, in 2004. The reintroduction program has generally been considered a success, with more than 50 individuals currently residing in the park. As the population grows, park officials must decide how to deal with dispersing individuals and how the program should progress. In this study, we use a mixed modelling approach to determine suitable habitat areas, carrying capacity for three different scenarios, and least-cost pathways. Suitability was first determined using a resource selection function (RSF) model, which was then incorporated along with life history traits into the population simulation software HexSim. We tested simulations for Jiri Mountain National Park, for South Korea with no further reintroductions, and for South Korea with a second, similarly-structured reintroduction in Seorak Mountain National Park. These simulations gave us average carrying capacities of 64, 230, and 1,111 individuals, respectively, with a maximum of 1,357 individuals possible in South Korea. Finally, we used the GIS tool “Linkage Mapper" to map least-cost pathways based on resource availability and landscape urbanization. The results of the network and map linkage tool match an actual dispersal route of one male individual which recently escaped from Jiri Mountain National Park and travelled to a location about 80 km away from this park. Based on these results, we strongly recommend a second reintroduction program in Seorak Mountain National Park and increased connectivity and habitat corridors along the Baekdudaegan Mountain Range.

Citizen sciences has become a mainstream approach for collecting data on biodiversity or other environmental issues. The set-up of common species monitoring at large scales help researchers to address biodiversity issues and to set-up monitoring index to guide management policies while rising people's awareness about the stakes of biodiversity's conservation.

Throught several exemples of citizen science projects that have been developed in Korea for few years, we will see all the opportunities that the development of citizen science represents. If they are usefull to fill a lack of data at a country-scale, they contribute to the development of knowledges about ordinary biodiversity ecological processes. A survey among the observers showed that these programs could also be a way to develop a new relationship between citizen and the nature.