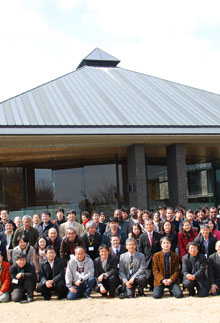 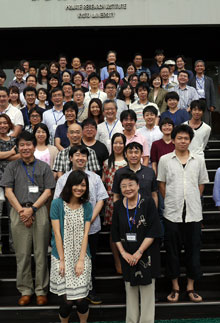 New horions of the advanced studies of human mind 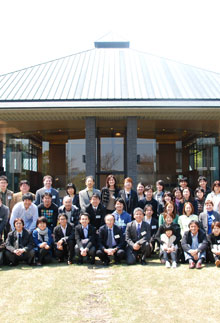 Aim  The IIAS Lecture entitled ”Evolutionary Origins of Human Mind” is open to the public, held in University of Tokyo, Tokyo, on December 8th. The public lecture will have three speakers as follows: Giacomo Rizzolatti (University of Parma, Italy) who discovered “mirror neurons” two decades ago, which is one of the most significant discoveries in science connecting the brain and the mind, Atsushi Iriki (RIKEN, Japan) who has created a new concept of “cognitive niche construction” through his neuroscience approach to the tool-use learning in monkeys, and Frans de Waal (Emory University, USA), who tries to elucidate the human mind from his ethological viewpoint by stressing “empathy” that is widely recognized in non-human animals. We introduce the issue of kokoro, the human mind, from a broad perspective from neuroscience, cognitive science, and ethology. The session is co-chaired by William McGrew from Cambridge University, UK., and Tetsuro Matsuzawa of Kyoto University. Toshikazu Hasegawa of University of Tokyo will have the welcome address. 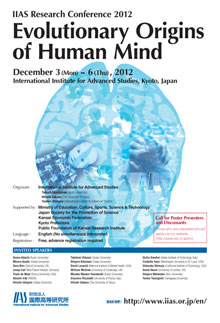 Aim  The IIAS Conference 2012 aims to illuminate the evolutionary origins of human mind from various perspectives. Primatology is in focus and about one third of the speakers have the background of Primatology. However, two thirds of the speakers are chosen from various disciplines such as comparative cognitive science of various species, neuroscience and neurobiology, human visual information processing, cognitive development and disorders, and cognitive robotics. The four days conference will provide new perspectives to think about where we did come from. The IIAS conference 2012 also invites the young scholars for the poster presentation. This may provide the rare opportunity for them to directly interact with the established scholars from various domains.